During the closing ceremony of the National No-Tobacco Week in Iran, in the Hall of Ivan-e-Shams, the Deputy of Social and Cultural Affairs in the Municipality of Tehran appreciated Dr. Mohammad-Reza Masjedi, the Secretary-General of the Iranian Anti-Tobacco Association (IATA) for his fruitful activities in the field of tobacco control and prevention.

At the ceremony, Dr. Masjedi, speaking critically of the improper implementation of the tobacco tax law, lectured on the worrying figures on tobacco consumption in Iranian adolescents and youth.

Appreciating the Health Department of the Tehran Municipality, Masjedi described the activities of the PAD project and considered it as an effective step towards achieving a tobacco-free society. Finally, Masjedi called for more cooperation among relevant organizations in the fight against tobacco. 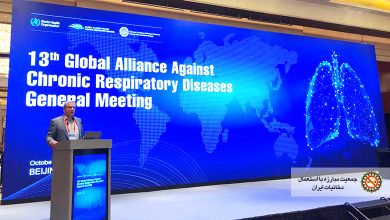